Gus and Koba are a healthy, happy pair of 1.5 year old boys.

Gus is the more playful boy, always ready for a game. He loves exploring the great outdoors on his leash and harness, and running around the house as much as he can! Gus also LOVES playing in tunnels, so he believes that they are a MUST in his future home. He is quite friendly, though he will occasionally nip noses. This habit would make him unsuitable for a home with small children, but he would do well with older children, or a child free home.

Koba a bit of a cuddly boy (for a 1.5 year old ferret). He loves to dig and would appreciate a home that would make him a dig box (or two or three). Koba, like Gus, loves to explore the great outdoors on his leash. Koba does have a habit of getting a little bit chubby, so he needs a home that will give him plenty of free run space (more than 4 hours a day) and plenty of adventures. 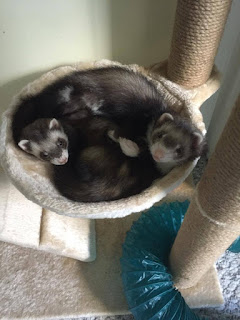 Both are good with other ferrets and, from what we have seen, good with dogs and cats as well.

*it was discovered that Koba has bladder stones and will require surgery. Adoption on hold until he has recovered. It is believed that the stones were caused by poor diet before coming in to our care. Please stay tuned for updates!*

*Gus and Koba must be adopted together

*Good with other ferrets

*Good with cats and dogs

*Not suitable for small children
Posted by ferrets in the north at 3:23 PM

We rely on the generosity of ferret lovers to help us help ferrets in need.
HOME
CONTACT
ADOPTION APPLICATION FORMS:
Click here
or download in DOC PDF